OK, so I know it is not officially summer, but the weather has been nice in Walla Walla, and a few weeks ago we had a little dinner party on our deck with some buddies and enjoyed some fresh salads, incredible steaks, great drinks, and most of all - each other...a taste of summer!!

I hope you're all enjoying the warmer weather, and that you have a summer filled with Jesus, good times, and great friends!! 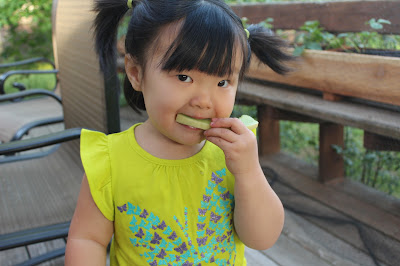 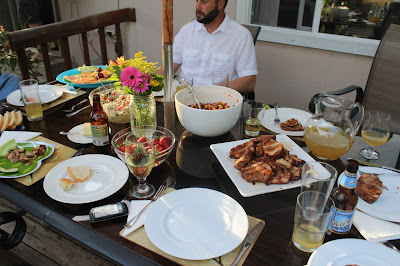 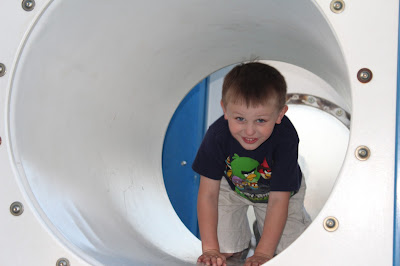 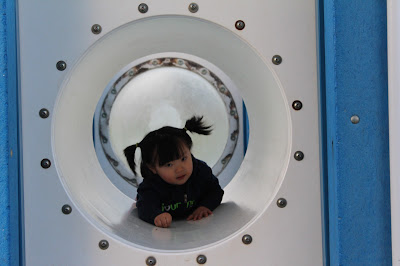 What is it about your darling baby in the darling bath??

We had a lovely day of love on Feb. 14. Me and Abi hung out all day (but that is our blessing every day), and we also made homemade cupcakes to bring to a few friends. I got Abi her first Valentine's Day gift - a cupcake cup. :) We celebrated as a family at home with take-out Chinese food, candles, cards, chocolate and flowers! I didn't get pictures of the latter, but here are two from the day. :)

It was a precious day to get to celebrate our first Chinese New Year together. Abi Mei wasn't interested in having her photo taken, and Baba wasn't able to be in the picure, but here's a few from the day. :) After church, we celebrated with dear friends of ours who are Chinese and own the best Chinese restaurant in town (or anywhere in Washington, I'm sure!). They had a Lion Dance during the meal. Incredible!! 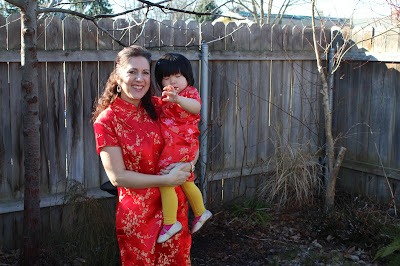 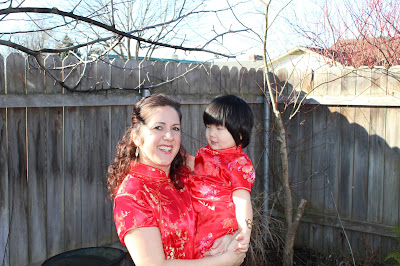 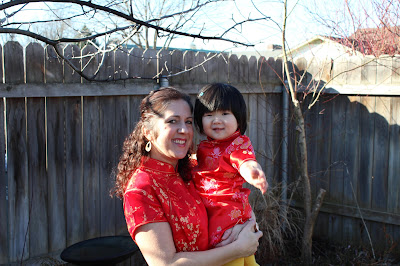 Just wanted to post some photos to share the latest of our lives. Hope yours is wonderful. I've been growing in deep ways as a daughter of God, mother of Abi, wife of Andrew, and a pastor at our church. Jesus has come to me in such beautiful, sometimes difficult, sometimes joyful, ways and I'm gobbling up every second He chooses to show up. This doesn't mean I get to spend devoted hours with Him every day, but I choose to get up early in the morning and be with Him, then actively seek Him and commune with Him while playing with Abi, or doing the dishes, or making dinner, or taking a walk with a friend, or working on something for my beloved church, or whatever is going on. If we seek Him, we will find Him, through the times we are flourishing or the times we are desolate. The key is that we seek Him.

May we all continue this awesome pursuit. Blessings!
Heather

Andrew and Heather Robinson
Welcome to our blog! Andrew and I desire to live the dreams God has dreamed of us. We have dreamt with God to have children and adopt, and we are living that dream. We became a forever family with our precious daughter, Abigail Mei, in July 2012. Now the three of us are dreaming together, and will soon add another child to our clan, Luke Andrew Robinson. Remember this, one and all, with God - dreams really do come true! Dream with God!!

March 28, 2009: Made the decision to adopt from Nepal.
March 30, 2009: Google-searched for an agency that has a Nepal program (there weren't any in 2008 since we had searched at that time), and found Adoption ARK.
April 6, 2009: E-mailed Adoption ARK expressing interest in Nepal.
April 6, 2009: Linda Podas (adoption consultant) at Adoption ARK e-mailed back, and sent the pre-qualification application.
April 7, 2009: Completed the application and faxed it to Linda.
April 8, 2009: Linda lets us know that we pre-qualify, and have been put on the 2010 Nepal waiting list.
April 16, 2009: Linda e-mails letting us know that our name has come up on the Nepal waiting list and we can officially apply into the Nepal adoption program!
April 17, 2009: Linda sends us the official contract, and says that we need to turn it around within 72 hours, along with money. :-) The contract is 35 pages (!).
April 20-22, 2009: Read the contract, filled out all the pages, and sent it in the mail with our money by April 22.
April 23, 2009: Linda e-mails saying our contract has been accepted, and that we are officially in the program. She said our case manager would be in touch with us within 48 hours.
April 24, 2009: Alina Radoslav e-mails us introducing herself as our case manager. Sends us lots of information and lots of attachments to fill out!
April 30, 2009: Phone call with Alina to meet each other and go over what we should be working on right now.
May 1 - June 9, 2009: Worked on our home study.
June 17, 2009: Overnighted our home study packet.
July 14, 2009: Mailed I-600A form to USCIS.
July 31, 2009: Home Study interviews in Seattle.
Aug. 28, 2009: Home Inspection at our house.
Sept. 30, 2009: Heather has her doctor's appointment for dossier medical report.
Oct. 3 and 4, 2009: Psychologist interviews; MMPI-2 test (457 questions!); Rohrschach test; intelligence test; and some other test that I don't know the name of.
Oct. 5, 2009: Meeting with psychologist to discuss report findings and review letters written by psychologist for our adoption agency. (Note: Tests confirmed that we are not crazy. Whew!)
Oct. 13, 2009: Andrew has his doctor's appointment for dossier medical report.
Oct. 22, 2009: Home Study approval reports received in the mail. (!!)
Oct. 22, 2009: Home Study approval reports sent to USCIS for I-600A application.
Nov. 10, 2009: Found out the USCIS address they gave us to send our home study report to was incorrect. Had to re-send to a different address.
Nov. 18, 2009: Sent all of our notarized documents to the Secretary of State for certification approval.
Nov. 30, 2009: Fingerprinting for USCIS approval.
Dec. 1, 2009: Dossier sent to Adoption Ark.
Dec. 7, 2009: Dossier sent to Nepal.
Dec. 11, 2009: Our agency's in-country Nepal represent receives our dossier.
Dec. 15, 2009: We are officially on the Nepal 2009 list! We are #500.
Aug. 6, 2010: The US closes adoptions to Nepal. We plan to keep our file there, praying that the doors will open again. May the Lord move mountains so these precious children can be with their forever families!

Adoption blogs I follow (all but the first one are Nepal adoptions):